Last week, Southern Californians experienced significant earthquakes, the strongest in over 20 years. On the morning of July 4, a 6.4, and evening of July 5, a 7.1. The epicenter was near Ridgecrest, a small, desert town of fewer than 30,000 people.

In Bakersfield, about 100 miles southwest of Ridgecrest, we felt both quakes, plus several aftershocks. Our house rolled. Then it jolted, creaked, and shuddered. To gain a better understanding, think of being in a rowboat on a lake when a speedboat passes, then like big hands shaking you from all sides. The rolling is mostly okay, but the creaking is very unnerving. You wonder if you should stay put (because these things are never a big deal) or run outside and stop, drop, and roll – or is that drop, duck, and hold on? It’s easy to forget in the middle of it all.

Friends post videos of water sloshing out of pools. Others post “Did you feel that?” Some post funny memes, showing a few overturned patio chairs saying they survived. We laugh because it breaks the tension we all feel. After a few hours, your heart rate slows a bit. The dizziness begins to fade. Life returns to normal.

The next day you read the post of a writer friend, who lives in Ridgecrest. He shares a picture of a cot, under a carport with this caption: “This was the bed I slept in for half the night. Four chairs lined up on my patio. Power was out until 2 a.m. I slept fully dressed just in csse [sic]. I honestly don't have the words to describe how I felt last night. Let's just say I ended up bawling in my sister's arms out of terror.” 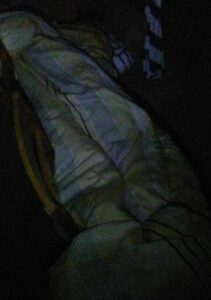 And you realize it’s more serious.

Then a day later you read there were over 4500 aftershocks in a 48 hour period. I’ll let that sink in while I do the math for you – that’s an average of 93 aftershocks an hour, more than 1.5 per minute.

And you realize those memes are not funny anymore.

My friend, Daniel Stallings, was born and raised in Ridgecrest. He’s a mystery writer; president of The Ridge Writers, the Eastern Sierra Branch of the California Writers Club; and founder/lead writer of Master Mystery Productions, a group that stages interactive mystery events.

I reached out to Daniel and asked if he would mind answering a few questions for my blog post. I asked him to describe what he felt, emotionally and physically. And I asked for pictures. He graciously agreed. The following words are his poignant and moving responses:

“Being in the earthquakes seemed to cancel out many of my senses. I remember feeling the ground shake, watching picture frames sway, and hearing the sounds of my mother screaming in another room...but not seeing her because she was out of my sight range. It wasn't until after the big shocks stopped that we could start smelling the growing fires.

Being in the desert, we all have this rather strange ability to identify what different fires smell like: wildfire, brush fire, fireplace, barbecues, etc. This was dampened house fires, that smoky smell that is slightly muted by the water used to combat it. Sirens and helicopters roared in the night after the 7.1. It was like every cliché you've seen in a disaster movie...but horribly real and without a shred of comedy to it.

Because the 6.4 was so unexpected, you barely had time to process what happened. Your legs turn to jello and you kind of nervously laugh about it. Because it seems so unreal to you and you think of it as over. Then you watch the news and feel the aftershocks. You realize how serious, how scary the whole crisis is. Your anxiety builds this big bubble in your chest and, if you haven't cried already, you feel you want to. But you push on.

The 7.1 was way worse. Not just because it was way bigger in magnitude, but because it was salt in the wound. A slap in the face. That was when we knew we were in a full-fledged natural disaster.

It happened at night. You don't have the daylight to chase away shadows. Our power went out, so we sat in the dark with nothing but a camp lantern to light up our exhausted faces. It happened so close to bedtime that it ruined the city's chances of sleeping. So we weren't even granted the freedom of rest. The 7.1 robbed us of our security, our sanctuaries, and our sleep. Nothing felt safe. That was the night dozens of people evacuated.

Emotionally, I went through lots of self-discovery, which sounds horribly cliche, but true. I learned how I process a crisis on a disaster scale and also what I need to recover from such an event. After the 6.4, there was a lot of anxiety, but I tried to funnel it toward positive directions like cleanup and checking on family and friends. I organized a cleanup of my local bookstore which I think did a lot of good for our emotional health. Of course, then came the 7.1. That was like...a betrayal.

It was very hard to pick up the pieces afterwards. I moved around in a numb state. I bawled my eyes out. I had to sleep on the patio furniture, and I didn't rest so much as enjoy unconsciousness. I hated being around people and being stared at. I spent the weekend away from people (even my own friends and family), because I realized that they were actually impacting my mental health negatively. Their anxiety, their way of handling the disaster actually made mine worse. I was pulling from their terrified feelings and getting worse and worse. So I stepped away from all of them.

To re-balance myself. On Monday, I went back to the bookstore to clean again. I was still in a heavy funk. Being around people irritated me. On a whim, I bought a play I had been considering online and didn't realize they had until that day. Must be fate. It was 'Night Mother by Marsha Norman, winner of the Pulitzer Prize for Drama. It's the story of a woman on the brink of her planned suicide and the conversation she has with her mother on the day she does it. My friends all thought I was crazy for buying a play on suicide. But I read it that day, and it was the thing that cured me of the dread and horror I was living through. I was in a bad place, so reading about someone at rock bottom helped me realize that I wasn't there. I wasn't in that place. I still had a lot of fight in me. It helped me achieve this sort of Zen-like calm about the situation and I was able to be that strength and light I needed to be for others. It's an excellent play, if anyone is interested.

The aftershocks used to keep me on edge, and some of the larger ones don't help. But, especially after reading 'Night Mother, I now look at them with perspective. Time marches on. Life moves forward. If I live trapped in constant fear, I'm stuck there forever.

The shocks have been decaying and moving away from us. That's good. And we can't stop our lives. We have to work toward normalcy again. It will be a new normal we construct for ourselves, but we will adapt and grow stronger.

The only pic I have is the one of my makeshift bed on the patio, which is on my FB wall. Feel free to use it. [See image above] We chose not to document the damage. Why have that reminder? Our memories are enough.”

A few days later, Master Mystery Productions company actors and members of the community returned to the library for another cleanup. In the midst of disorder, they brought order. Daniel sent these four pictures, sharing positive memories of their new normal. 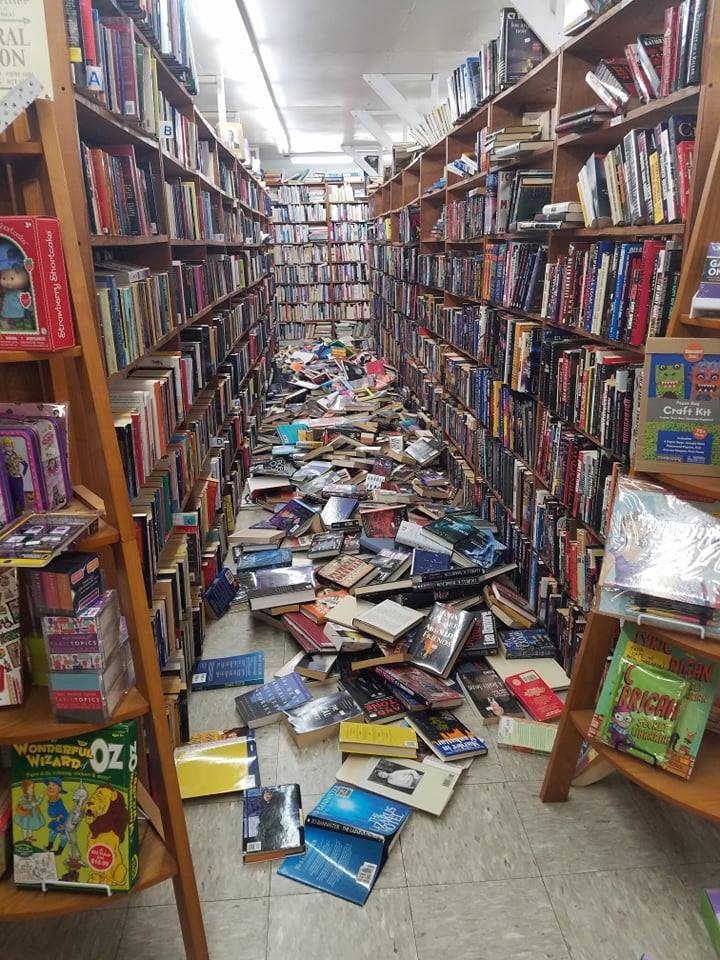 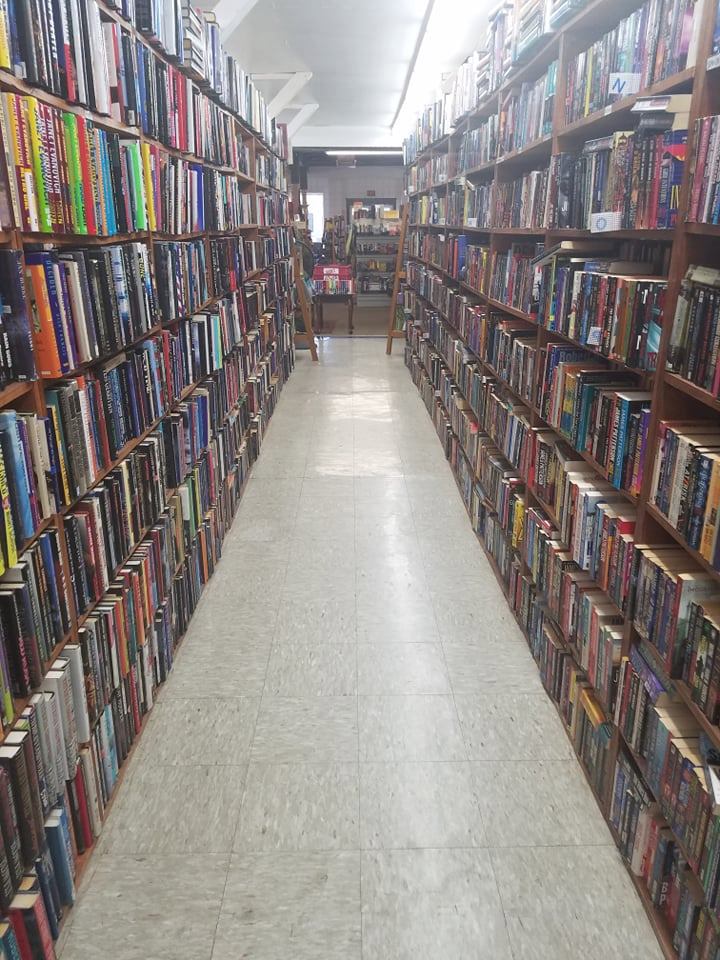 3 thoughts on “A New Normal – After the Earthquakes”