Before we get started, I'd like to introduce you to our two dogs, Jackie and Madison. Sisters. Australian shepherd mixes. Adopted from the animal shelter in 2014. 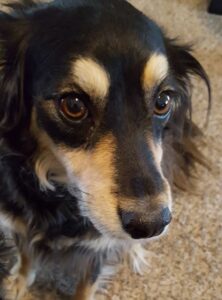 Meet Jackie. She's the extrovert—expressive, friendly, outgoing. Every visitor is an instant friend. No one’s a stranger. She’s always in the same room as my husband, David. With food, she’ll eat anything—even cucumbers. And nothing (except fireworks) scares her. 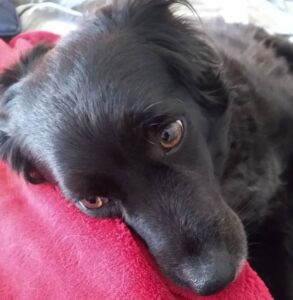 This is Madison. She's the introvert—fearful, reluctant, watchful. Leery of strangers, she takes a while to warm up to people. She’s fiercely protective of me. Wherever I am, she’s right there with me. Food—she’ll eat when she’s hungry, but it’s not important. And most everything scares her (especially fireworks).

Every morning our dogs signal the need to be let out. Of course, it’s well before the humans prefer to get up. Thankfully, my husband opens the bedroom sliding glass door just enough for them to go out and come back in again. Soon after, our cats, Stormie and Molly, follow their fur-cousins to explore or watch the birds.

This system works well for (most of) our pets. They go out, then come in (sometimes multiple times) at their leisure. The cats bask in the sun, then stroll in and out. After Jackie heads outside, she’ll return to continue doggie dreaming. And though leaving the slider open has eased the need to monitor the comings and goings of said pets, it’s also caused considerable consternation for Madison.

When David leaves the slider open, he closes the curtain, effectively blocking the morning sunlight so the humans can drift back to sleep. But despite a fabric curtain, Madison sits outside whining. At first, we thought something was wrong. But upon closer scrutiny, we noticed her sitting at the threshold, afraid to come through the brocade barricade.

We called and cajoled, but she didn’t budge. Even though the cats and Jackie passed through the perilous portal with no lasting trauma, Madison wanted someone to open it before she’d venture back inside.

This went on for a while, reducing the sleeping-in time for the humans (and totally diminishing the whole reason for leaving the slider open in the first place).

After no amount of persuading would get her to take a chance on ‘what’s behind the curtain,’ David left it open just a sliver hoping Madison would realize her physical barrier was merely a perception which kept her from her goal (to resume doggie dreaming again).

Finally, after a few attempts (and much praise from the humans) Madison realized she could nose through the scary barrier. The impenetrable wall holding her back was approachable and open. But until she knew it would be okay, she didn’t even try.

Now, if you’ve guessed this is not just a post about dogs and curtains, you would be correct. This is also how we humans view our obstacles. Do we see them as fabric, easily pushed aside? Or do we see them as wood or stone, perceived as impossible to get through?

I always wanted to be a Jackie, but have fought panic anxiety for almost 40 years. For the last seven years, Chronic Fatigue Syndrome and Fibromyalgia have zapped what little energy I had. What seemed to be nothing for some, I’d overthink every situation. And more times than I like to admit, I’ll give up before trying—partly from anxiety, partly from exhaustion.

Even though my rational self knows panic is temporary, my irrational emotions cannot decipher the difference between real and perceived danger. While it might be a soft curtain, my brain sees it as a brick wall. Deep down, my mind tells me the ‘thing’ I want to do is impossible. And instead of risking it and being vulnerable (leading to the shame of failure) I retreat.

Next, my negative voice starts in. The one that reminds me of all the crappy things about myself I already know, but don’t have the energy to shut it down. Then, I’ll spiral, telling myself I’ll never be able to do anything ever again…

After watching Madison come close to giving up, I realized how much she and I are alike. Just like her, I just needed the ‘curtain’ to open a sliver. Enough for me to see the big, awful thing (in my mind) holding me back wasn’t so terrible after all.

While I can’t do everything I want to do, I’m doing more than I used to. With familiarity and perseverance, I’m slowly realizing my brick barriers are only cotton curtains.

I’m also working on dispelling my discouraging voice, daring to perceive things differently, and replacing criticism with cheering. I counted every step forward as a win. And on the tough days, just showing up is a victory.

Do you see yourself as a Jackie, plunging forward through every situation?

Or do you see yourself as a Madison, standing on the threshold, waiting, wondering if you can manage?

Either way, it’s okay. You're okay! When you're faced with the decision to be courageous or back down, remember:

I believe in you.

What are your recent wins? Let me know in the comments.

4 thoughts on “Are You a Jackie or a Madison?”