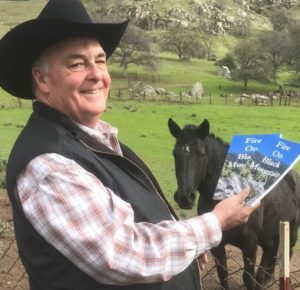 I’m chatting with Brent Gill about his newly published middle-grade novel, Fire on Black Mountain. Before we get started, congratulations on your book! This is a major accomplishment.

Thank you so much, Joan. It sure feels like a major accomplishment to me. It has been a five-year process. It’s quite an experience to type my name into a search box and see that magical thing known as “My Book” appear on the screen. When the shipment arrived with my first copies, and I held “My Book” in my hand, I must admit to a tear in the eye. Yes, it is a major accomplishment.

Q: Tell me more about you and why you were the right person to write this book:

I was raised on a working cattle ranch, doing and observing all the things a rancher’s son would have an opportunity to do and see. With these experiences, I recalled the things I’d seen and done in order to bring a greater sense of reality to my descriptions of horses, cattle, and the people who work with them all. My father used to tell me stories about running cattle on a Forest Service permit on top of Black Mountain. Before I was old enough to go with him to help care for his cows on the mountain, he gave up the permit. The Black Mountain stories fascinated me, and I really wished he’d get the permit back. Riding up into the mountains to work cattle, rather than in the heat of the foothills where I grew up, sounded wonderfully exciting. The magic of going to the big mountain back of my home became the backbone of this story.

Q: Tell me more about Fire on Black Mountain:

In 1956 I was 12 years old. My father woke me shortly after midnight. “There’s a fire on Black Mountain Brent. I need you to get up.” As I remember, my intelligent answer was, “So?” He needed me to accompany him to take a small group of firefighters to a smoldering lightning strike. However, he had to get to the top of the mountain before the sun came up and dried the dew holding the resulting fire in check. I was very excited about making a trip up Black Mountain, which has long been a well-remembered experience in my life. When I started attending a Writers Group, several other members were writing books. The notion of writing a book based on my trip up the mountain with my dad back in 1956, turned into a vehicle which ultimately taught me a great deal about writing skills.

Q: Billy Scott is based on you as a young man. How close did you stick to reality? How much is fictionalized?

Billy Scott is a fictionalized version of me. By “writers privilege” he displays only the very best of my characteristics and none of the bad. One of the ladies in my Writers Group says, “Never let the truth stand in the way of a good story.” The basis of the book is real, but it is indeed a fiction story. I was able to rely on my memory and experiences to enhance the fiction, and hopefully endow Billy Scott with reality, accurately reflecting life experiences in his adventures.

Q: Themes of perseverance, coming of age, and responsibility are subtly woven in the storyline. Did you intentionally send a message to the young people reading your book or did these themes appear more naturally?

They grew out of my life growing up on a working ranch, riding horses, fixing fence, doing things I didn’t always want to do. The boss was my father. My brother, 15 years older, was my supervisor. I grew up on the ranch, both literally and figuratively, so when the story began to evolve, the “coming of age” aspect was natural. I must admit to a good bit of wishful thinking, and maybe even some “Walter Mitty” ideas. In this first book, Billy Scott’s father has broken his leg and can’t ride. So the task of taking the firefighters up the mountain in the dark falls to 12-year-old Billy, who must rise to the occasion. I tried to record, as accurately as possible, how I would have felt if I were in Billy’s boots.

Q: Billy’s story is wholesome and isn’t filled with sex, cussing, or violence. Tell us why you wrote it this way and not like mainstream middle-grade novels.

Simply put, I was raised that way. We were not saints, and that’s not to say there was never a curse word heard on the ranch. But we didn’t live that way. So when Billy Scott speaks and acts, he does so with character and constraint in both thought and speech, reflecting my upbringing.

Q: Tell me about your rewrites/edits. How much time did you spend? How much was cut from the original first draft?

I started writing Chapter 1 roughly five years ago. The skills I possessed then severely limited my ability to make the story something a Junior High student would ever want to read. When I finished the tale the first time, I immediately went back through, taking a chapter a week to my writer's group. Even after that, after cutting three whole chapters, I was still not satisfied it was worthy of offering to a publisher. By then it had been at least two years or more since I began the story. I let it sit, telling myself “someday” I’ll rewrite it again. This time I’ll make it better. Another two years passed with me feeling guilty for not “getting with it” again. Last Christmas, at our annual Christmas Dinner with the writer's group and spouses, one of the newer members of the group innocently asked me, “Have you ever thought of writing a book?” When I said I had but wasn’t satisfied with it, the other writers jumped on the bandwagon. They urged me to “bring it back and let us help you make it better.” I did. And they did.

I started again, taking Chapter 1, Chapter 2, and Chapter 3, each a week apart, to read and be critiqued. After reading Chapter 3, one lady leaned back and said, “I think you need to take the first three chapters and condense them into Chapter 1. You’ve got to get that boy moving in this story.” That was like telling me to cut off one of my appendages. But when I finally worked up the courage to start, I could suddenly see what needed to be done, and I was on my way. When I began thinking about publishing my efforts, to be honest, I was much too impatient to wait for a publisher to pick me up. The only certain avenue appeared to be through a term I intensely dislike, self-publishing. That sounds much too egotistical. Again, it was not the way I was raised. About that time the term “independent publishing” came along. Problem solved. The process of getting KDP (Kindle Direct Publishing) to publish it is the same, whether self-published, or indie-published, but it sounds better.

Q: According to the title page, this is Book 1 in the Scott Ranch Adventures. Any idea of how many more adventures we can look forward to? When Book 2 might be released?

Book 2, with a working title of “Return to the Mountain,” is being written now and is over half finished. With my first book in hand, the stumbling steps taken to get a second one through the process should be much faster. Book 2, whatever it is to be called, should be ready for distribution in three to four months. At this point, I can see at least two more books beyond this next one. Billy Scott is 12 years old in Fire on Black Mountain and I think he’s going to have to age. That will let me weave in other life experiences and events and create tales around them.

Q: Would you like to add anything else—about your writing process or about your book?

We write from our hearts, sometimes we even use our heads. But our hearts feed and stimulate our head to get the words down. Because our hearts are involved, the critique process is at first painful, but ever-so-necessary. My Writers Group have been largely responsible for any improvements in my skills. I am fortunate to be able to write a successful column in my local paper over the past six years. It is a gratifying experience to have people tell me how much they enjoy my writing. I can’t carry a tune in a bucket with a lid. My artistic skills are non-existent. When my practice of the art of writing is appreciated, I am blessed. If Fire on Black Mountain is appreciated and valued, I will be honored.

Brent’s book is now available in paperback and eBook on Amazon. Follow this LINK for more details.