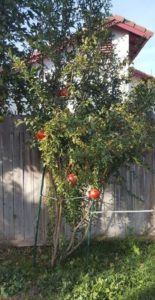 A few years ago, on Mother’s Day, my kids took me to the garden department of a local home improvement store. Keeping within their budget, I picked out two of my favorite trees - a self-pollinating Pomegranate (for the fruit) and a Japanese Maple (for the brilliant crimson leaves). Soon after we brought them home, both trees found new homes in our backyard.

The Pomegranate thrived in its sunny location just west of the lemon tree. The first year it produced a few reddish-purple blooms, brightening up our back yard. Last year the little tree, just barely over six-foot-tall, was covered in blooms which eventually gave us over 20 softball-sized, juicy pomegranates. This year, it’s fuller and taller, and I’m expecting another bountiful harvest.

The Japanese Maple was planted just west of the Pomegranate, also in full sun. And while it seemed to be okay, it didn’t look as happy. The first year, the bright crimson leaves withered and burned under the scorching Valley heat. Last year, hoping to save its fragile five-pointed leaves from the harsh conditions, I covered it with garden shade netting. But, by the end of the season, summer had taken its toll on the small tree.

Something had to be done. I didn’t think my little maple would last through another sizzling summer. As it went dormant over the winter I considered different options. This past week, as its leaves began to open, I knew it was time to decide on a plan of action.

A few weeks ago, for my birthday, my husband treated me to a tree-shopping spree at the garden department of a local home improvement store. This time I searched for another self-pollinating fruit tree. I looked through a plethora of apple and pear varieties. After reading the labels, I settled on a single Fuji Apple. The tag said it needed full sun and would be fruit-bearing within three-four years. I knew we had the perfect spot for it.

Yesterday, my husband suited up. Heavy boots, gloves, jeans, and a lumberjack-like flannel shirt. He was ready for the mission ahead of him.

First, he trimmed one side of the lemon tree. Then, he cleared a space – after all the recent rains, the weeds were growing like… weeds! Next, he dug a large hole and backfilled it with soft soil.

Now, it was time for the plan of action. He went over to the little maple tree and gently scored the dirt around its base. As he dug deeper, he loosened it from its home and lifted it out of the ground. He placed it in the hole under the lemon tree, filled it with nourishing soil and tamped it down with his boot. As I gave the maple its first drink of water, he readied its former home for the new tenant.

After a bit of backfilling, he placed the Fuji Apple’s potted roots into the readied place of honor, the pomegranate’s old home. He mixed soft soil and premixed nutritious soil until the Fuji stood strong and tall. After tamping down the dirt around the base, I gave it a healthy drink.

Two newly planted trees (well, one new plant, one transplant) stand tall in our backyard. I hope both are happy and enjoy their new homes. The Japanese Maple, with more shade than sun, should flourish. The Fuji with lots of sun should offer its thanks in the way of a bountiful harvest in a few short years. Happy trees = happy me!