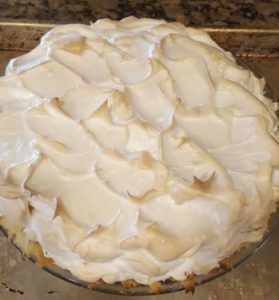 Brian visited a week before his birthday with the request of yellow cake and chocolate frosting. Done!

Michelle lives in Portland, so I lost out on making her a birthday treat.

And Matt. “What kind of cake do you want?” I asked.

“No cake. Lemon meringue pie. But no topping,” he said.

Uggg. It has been years since I’ve made a lemon pie. Not a feat for the faint of heart as I make the whole thing from scratch, including the crust, filling, and topping. (Yes, if I was going to the trouble of separating eggs, he was going to get meringue too.)

I picked the lemons yesterday. Juiced them and zested the rind. Make the crust, baked it to a toasty perfection. Then made the filling. Stirred until bubbling and well, you get the idea.

A few hours later as I whipped up the meringue, my thoughts drifted back to when my mom made a lemon meringue pie for a church bake sale. After she spent hours on it, flipping the meringue peaks just so, she baked it until they were golden brown.

On the way to the church, she sat me in the back seat and gave me the honor of holding her prized pie. I was so proud.

As she drove, I was intrigued by the little golden peaks. I figured no one would notice if I picked off just one. So, I did. And it was tasty.

It took us a while to get to the church, and by the time we got there, I’d picked off each of the meringue peaks. When my mom saw her peak-less pie, she scowled. While I don’t remember exactly what punishment I received, I do know I never picked the peaks off of any of her pies again.

Now as I stare at this perfectly baked, full of peaks pie, I wonder… would anyone notice if I tried just one??!!