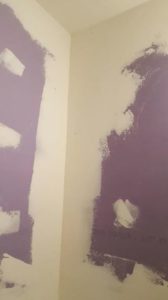 Thank goodness for YouTube. One can attempt just about any home improvement project with confidence. Last year, we re-tiled the Master shower. It only took us a year – but we got it done. And it looks great.

With that success behind us, we decided to tackle the main bathroom. This time we gutted it to the studs. There’s nothing like the thrill of destroying something to make it better.

Although I did lend a hand in the demo, my husband David added new studs, then installed all the sheetrock. And while he’s still installing the final pieces of cement board in the shower area I’ve been busy playing in the mud – sheetrock mud, that is.

The first layer, along with tape went up easily. It took me a few days to finish all the walls. David helped with the wall/ceiling joints as I’m not thrilled about being on a ladder while holding taping knives with mud in each hand.

After those joints dried, the second layer of mud went on next. There’s something about working on our own house. And even though it takes us (much) longer to finish our projects, there’s a real satisfaction with the whole process.

Mudding a room gives me time to think. About stories. About whatever. The sweeping motion of the drywall knife, especially the 8” and 12” ones make me feel like I’m painting smooth, bold strokes on a life size canvas. And the best part is, it’s easy to cover up mistakes. Just scrape it off and glop on some more.

Now that the two layers have dried, the next step is sanding – which David will do with a respirator. Then, he’ll use our hopper and air compressor to texture. If I get bold enough, I might even try my hand at texturing. Primer and paint will follow, and we’ll have real walls again!

Thanks to David taking pictures at each step, I’m sure there will be further posts with updates.