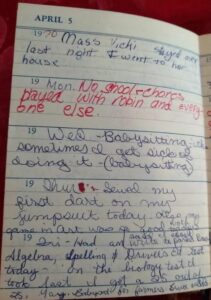 Somewhat confusing entry. If Vicki stayed over at my house, but then I said I went to her house… was that after or before she stayed over? Ambiguous, yet intriguing.

Of course, no school always meant chores. Robin and her family lived a few houses away. She had two younger sisters and we’d always be at her house or mine.

I babysat a lot in those days. While it gave me some spending cash, I remember being tired of taking care of kids and changing diapers. At least I was honest enough to say that I got sick of doing it – yet, I kept going.

*1973 (age 15): Thur. Sewed my first dart on my jumpsuit today. Also, my game in Art was so good, both teachers said I should write to Parker Brothers.

Two big memories this day. First, Home Economics. I loved the cooking part (fall semester) and sewing part (spring semester). I picked out a pantsuit pattern which was quite advanced for my skill level. After working on it for quite a while, I was so happy with the results I wore that pantsuit all the time.

Second, my “Telephone” game that I made in Art class. I made an entire mock-up of a board game, complete with a phone dial spinner (yes, in those days we had dial phones) and places on the board to move forward or backwards depending on what each space said. My teachers loved it and encouraged me to write to Parker Brothers. I was excited and terrified at the same time. What if they hated it? Only time would tell…

Seems like my life consisted of babysitting, chores, and tests. I remember I enjoyed Biology and did well on most of the tests. We were in a test group that year where we could work at our own pace. Some of us, like myself, finished the class way before the end of the school year, while others only got about half-way through. I seem to remember they didn’t think self-paced Biology was a good idea after that since quite a few students had to go to summer school to finish.

Note to self: You’ll take the chance and write to Parker Brothers. They’ll write back and let you know they don’t take unsolicited games (games from non-agented game designers). You’ll save that rejection letter and refer to it often because while it will sting, know that it will be good practice for when you submit countless manuscripts during your writing career.

And yes, I still have the letter. I treasure it because 1) I had the courage to write it. And 2) It's pretty cool to have a rejection letter from Parker Brothers received when you were in 9th grade.