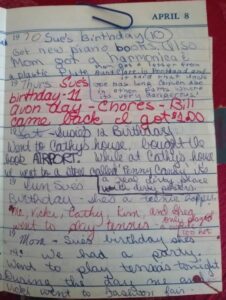 *1970 (age 12): Sue’s birthday. (10) Got new piano books. Also, Mom got a harmonica & plastic flute. Mom got a letter from Aunt Clare in Portland and it said that Uncle Joe has lung cancer also in other parts where it’s very dangerous.

My sister, Sue, was two years younger than me. While I seem to remember my mom having parties for her, none are mentioned until my 1974 entry. Though Sue had Down Syndrome and was non-verbal, my mom never treated her any different than my brother or me when it came to birthdays or holidays.

My mom was born in Minnesota. When her brother Joe came to Bakersfield, California and got married, she moved to Bakersfield to help them with their children. By 1970, we’d moved to Fresno and Joe, Clare, and my two cousins had moved to Portland. She missed him a lot. I remember when she got the news of his cancer and was devastated.

Wow, watched the animals for the neighbors for three days and made a whole dollar. Big bucks!

Ha Ha. I remember going to Penny Candy on Blackstone Ave in Fresno. It had risqué posters, roach clips and other drug paraphernalia. I don’t know if we ever told our parents we went there – as I’m sure they would have said it was off limits. As I remember we went more than a few times to look around.

My sister turned 13. It was a big deal, though I didn’t write much about her. More about the tennis game and heat. Kinda sad, now that I think about it.

I wish I’d written more about Sue’s party. I’m sure my mom made a cake and invited over the cousins, though right now I can’t remember what happened. As before, the rest of the day got more space than my sister’s big days.

Note to self: Though Sue was non-verbal, she understood a lot more than you realized. In your kid-eyes she seemed like an annoying sister; but, she will teach you how to listen, to trust, and how to love unconditionally.

3 thoughts on “Snippets From the Past – April 8”