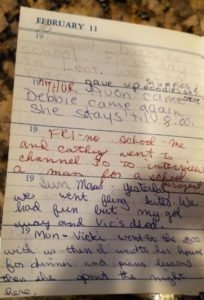 Slurpees were a big thing in those days. My friend Vicki and I would walk home from school and pass a 7-11. I remember buying lots of the frozen treat (along with the goodies, mentioned above). I’m guessing giving them up for Lent wasn’t easy.

I went back a few days because I have no recollection of what happened. Apparently, Debbie’s mom was in the hospital and she stayed with us during the day. I feel bad I don’t remember anything about this, though it was important to my younger self to talk about it.

“Me and Cathy” – more eye twitches. While I don’t remember the project, I vaguely remember going to the local television studio for the interview. I do hope more about this comes up in future entries as I’m interested in the project and interview results.

Flying kites – a well-loved pastime. I remember buying them, putting them together, then running like crazy down the middle of the street to send them into the air. Most of the time, they did get away or died (crashed on the street or a tree ate it).

While we only went to school through 8th grade together, Vicki and I spent a lot of time at each other’s houses during high school. I took piano lessons for three years (6th – 8th grade), but Vicki continued. Every once in a while, I’d get to go with her. I remember her piano teacher’s name was Mrs Babcock, but that is all I remember about her teacher or the lesson.

Note to self: Kudos for having more to say than “it was a boring day,” though I wish I could go back and see just a little bit more of what was going on. While reading, quick scenes appear briefly – the television station, Mrs Babcock’s house, running down the street trying to launch a kite – but then they fade. Only the snippets remain.