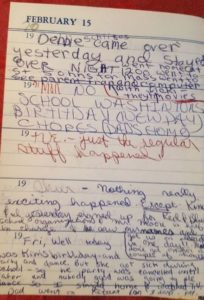 *1970 (age 11): Debbie Schlises came over yesterday and stayed overnight. Went home at 12:00. Went to St. John’s for Mass. Went to see Parent Trap and Computer That Wore Tennis Shoes with Vicki – they were movies.

Unfortunately, my recollection of Debbie is fuzzy. But, I do remember St. John’s. It was a huge, two-towered, brick cathedral built in the 1880’s. I loved going there for Mass because there was so much to look at – from the stained glass windows, to the high arched ceilings – it was quite the architectural sight. Click HERE for more information on the magnificent building and it’s history.

Going to the Tower Theater in Fresno to see old Disney movies was very popular in the 70’s. My parents took me frequently (along with family and friends). “The Computer Wore Tennis Shoes” starred a very young Kurt Russell. “The Parent Trap” was the original with Brian Keith, Maureen O’Hara, and Hayley Mills. It plays every once in a while on cable, and I still enjoy it.

Interesting fun fact: When I graduated high school in 1976, Vicki had gotten a job there and suggested I apply. I was hired as the “ticket lady” who sat in the booth in front of the theater selling tickets.

Washington’s birthday (Feb. 22) was replaced by “President’s Day” in 1971 (Google). Note, I usually wrote ‘nothing happened’ but, this time I actually wrote something historic - the first occurrence of this new holiday.

Thank goodness it wasn’t a new holiday or we might have missed some important news!

*1973 (age 14): Thur. – Nothing really exciting happened. Except – Kim & I signed up for Red & Blue school organization & Mr. Moore is half in charge & he saw our names and got us on already in one day!! Most don’t get on for a couple of months.

So, it appears the day was boring, then I remembered about Red and Blue. Apparently, we had some pull with this teacher since we moved to the front of the list.

*1974 (age 15): Fri., Well, today was Kin’s birthday – and party and dance. But she got sick during school – so her party was cancelled until later and nobody good was going to the dance so I stayed home & watched T.V. Dad went on a retreat for 3 days – YAY.

Not a good day for Kim or dances. Have to laugh at the “nobody good was going.” Funny how decisions to attend a school function were based on who else would be there – especially a dance. Those dreadful social gatherings where the boys stood on one side of the gym and the girls on the other, each side waiting for the first brave soul to make the long trek to the other side.

T.V. was a good alternative. And Dad going away meant NO CHORES on Saturday! Always a plus.

Note to self: Thank you for a more detailed look at that day over the five-year span. Good job, younger self!