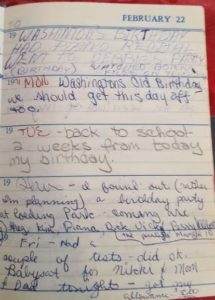 Oh dear, the dreaded piano recitals. They were held at the piano teacher’s home in front of a dozen or so parents. My fingers would tremble, then freeze up to where I couldn’t play one note. Some I got through okay, though one I was so shaken, I stopped playing and ran into the kitchen. The kitchen held our reward – donut holes. To this day, I can’t see a donut hole without remembering those recitals.

Born Free – I sobbed for hours at the end of that movie. Even today, I can’t hear the theme music without a catch in my throat.

A few days ago I shared how this was the first year there was a “President’s Day” holiday. My old self must have felt robbed of another full day off.

The birthday countdown begins. Probably a boring day, if that’s all I could write about.

I still remember that party (I’ll share the party details on March 10). Of that group, two friends – Vicki and Perry – were from 4th - 8th grade, the rest were new friends from 9th grade.

Vicki and Diana have stayed close friends with me all these years. Perry became a Catholic priest and my dad went to his parish in Fresno. When my dad passed in 2010, I asked Perry to do the funeral Mass. (Note, for the Writers of Kern members reading this, yes, that’s the same Father Perry who officiated at Terry Redman’s funeral). Greg (who I hadn’t seen in over 30 years), Diana, and Vicki came to the funeral. I reconnected with Dick and Albert on Facebook some years back.

Though my main source of income was babysitting, I did receive an allowance. It started out small, like $2.00 a month and capped at $5.00 each month in high school. But, my dad only gave half because 50% went into a savings account he opened for me. I hated this, as I wanted my money. (He also required me to give him 50% of my paychecks when I got summer jobs, which was also frustrating.) During my high school graduation party, my dad handed me the savings account passbook. It showed a balance of $1,800! Because of him, I was able to purchase my own car, a 1966 Ford Mustang, plus the first year of insurance, and had a lot left over.

Note to self: The friends you met in school will be your forever friends. Cherish them for they will be there for you more times than you’ll know.

While you’re upset that half of your hard-earned money is being taken, trust your dad. He is watching out for you and has a plan. Don’t question or complain, just know it will be okay.