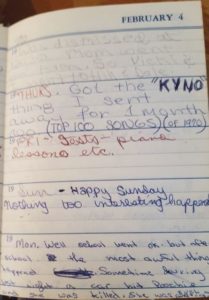 A while back I found my old five-year diary. A Christmas present from my mom, I began writing in it in 1970 (when I was 11) and finished in 1974 (when I was 16). It’s interesting (and, at times, embarrassing) to re-read the things I deemed important at those ages. For the Dan McGuire Blog Challenge, I’ve decided to bare all and share my entries. I’ll also include a commentary or notes to my younger self. Enjoy!

Always excited about a half day at school. My mom sold Avon, and apparently, it was a big deal when she ‘went on Avon.’ Vicki, my friend I met in 4th grade (1968) spent many an hour at the locally owned craft store, Hill and Dale. While I don’t remember what we bought, I know we frequented that store all the time, which was within bike-riding distance from my house.

KYNO was a radio station in Fresno. I listened to it all the time as a teen.

Pretty much summed up a boring day.

This didn’t leave anything to the imagination – nothing happened!

*1974 (age 15): Mon. Well school went ok. But after school the most awful thing happened. Sometime during last night a car hit Poochie and she was killed. She was such a sweet cat.

Poochie was my brother Bob’s cat. I still remember when we found her hit by a car. I’d eat eggs every morning and share them with her. After she died, I couldn’t eat eggs for a while because it made me too sad.

I remember writing how several days were uninteresting. While I’m sure something happened, I didn’t deem it necessary to record. I wish I would have shared what I ate or what song I’d listened to (on KYNO) – my older self is curious and wants more details of those hum-drum days.