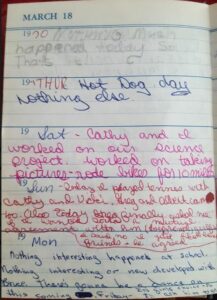 Pretty much says it all.

I don’t remember the details of the science project, although it could have been when I took pictures of all the blooms on fruit trees. I do remember riding bikes to all the orchards around and taking pictures of the blooms (and then identifying them). Riding bikes for 10 miles – sounds like we went all over.

*1973 (age 15): Sun. Today I played tennis with Cathy and Vicki. Greg and Albert came too. Also today Greg finally asked me if I wanted sorta a mutual agreement with him (boyfriend-girlfriend) I said no. I just liked being friends. He agreed.

While most of the day was “uninteresting” this event still stands out in my mind. Greg asked me to go steady. Even though I wanted to say yes, I told him no. I never had the heart to tell him why and it always made me feel bad.

Fast forward to 2010. My dad’s funeral. My friend Diana and Greg attended, which I didn’t even know until afterwards when I was waiting in the funeral limo (along with my family). When I saw Greg (I hadn’t seen him since high school), I asked him if he remembered when I said no. When he nodded, I told him my dad had told me at 15 I was too young to go steady and how he told me to say no. I explained at the time I was too embarrassed to tell him why.

While it had been 37 years since that all happened, I blurted it all out. How bad I felt. How I never meant to hurt his feelings. And how sorry I was. And, 37 years later, he smiled and said thank you. It was like an open wound had finally been allowed to heal. Most likely for both of us.

A year later I was now 16. While my dad still didn’t want me to get involved in any “steady” relationship, at least he conceded and let me go out on a few dates.

Note to self: Focus on having a lot of friends. Don’t worry about going steady or relationship labels. It will get in the way of a good friendship.