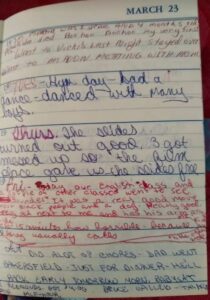 Martha the mouse, was my first real pet. My dad finally relented and let me get her. She was white with brown spots and friendly. Once she got out of her cage and ended up in my parents’ bed. My dad woke me at 3:00 am and made me catch her. We never figured out how she got out of her cage in my room – or why she crawled all the way down the hall into my parents’ room. I thought it was funny. Unlike my dad, who was livid.

Man, I hated those Gym-Day dances in 7th grade. I always had sweaty hands and was stressed out – especially when our teacher – a Catholic school nun - would pair us up.

This had something to do with a science project. Wow – slides! It’s been a while since I’ve seen those. Although, I know I have boxes of them somewhere in the house even though I no longer own a slide projector.

*1973 (age 15): Fri. Today our English class and a couple of other classes went to see “Sounder.” It was a real good movie about Black people and a dog. Really good. Greg sat next to me and had his arm around me. Kim sat on the other side.

We must have all gone into the gym to watch the movie since there were several other classes. I must have enjoyed the movie since I said, “real good” and “really good” twice. Although Greg and I weren’t officially dating (as noted in a previous post), it appears we did take advantage of the dark gym to sit next to each other.

Typical Saturday with lots of chores. I babysat for the Redmond’s a lot. They had three kids, including a baby, and a slobbery dog. The pay wasn’t much, but it was something. I like how I noted the amount of time spent on the phone – like it was a badge of honor to talk for that long.

Note to self: While Martha was just a little mouse, Dad was testing you to see how well you’d take care of a real pet. Even though she passed away, you’ll soon have other pets, ones that will become beloved members of the family.