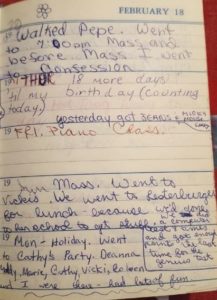 Pepe was the next door neighbor’s dog. A very rambunctious poodle, he loved to chase a tennis ball. Reading a few earlier entries, I remembered how the neighbors paid me $2.00 to walk him. Quite nice pay, compared to the 50 cents to a dollar for hours of babysitting.

Nice that I made the distinction, as one wouldn’t want to mis-count days towards one’s birthday.

Ah, piano lessons. Mrs Bush with the red door. There were four or five of us in the class. One was on a real piano, while the rest of us have keyboards, that didn’t make a sound. She taught us to play classical music, which I found boring. Towards the end of my three years of lessons, I’d fake being sick. Lost in Space came on at the same time, and I wanted to stay home and watch it. I still have all the music from those years, and every once in a while I’ll plunk out an old classic tune. Now, I don’t find them so boring.

*1973 (age 14): Sun. Mass. Went to Vicki’s. We went to Lesterburger for lunch because we’d gone to her school to get stuff. We did a computer test 8 times and got enough points the last time for the genius test.

Lesterburger was a hamburger joint not too far from my house. We’d enjoy the 39 cent hamburgers with shredded lettuce (something unique in those days). Follow this LINK for more Lesterburger memories.

Of all the entries, the mention of a computer caught my eye. I shared before that Vicki and I went to school together through 8th grade. She went to Memorial the Catholic high school, while I attended Hamilton Jr. High for 9th grade. I find it interesting we 1) went to her school on a Sunday, and 2) we used a computer. And, not only did we take a test – we took it EIGHT times in order to get to a certain level. I don’t remember this at all, although it might be the reason I retake those Facebook “Which Movie Character Are You?” tests multiple times to get the one I want.

Most, if not all, of these girls, were friends from 8th grade. Not all the names are familiar now, but I do remember keeping in touch with them after we went to different high schools. It’s interesting that I only mentioned the last name of Deanna and not the others. Her father was Ken Maddy, who was a member of the California State Assembly and California Senate. We all thought it was cool to know a famous person.

Note to self: Funny how things I took for granted became such fond memories. If I could go back, I’d remind myself to savor those times with friends munching on burgers or playing on a computer. Those days, while normal and sometimes touted as ‘boring’ or ‘ordinary’ will become a great inspiration for future stories.