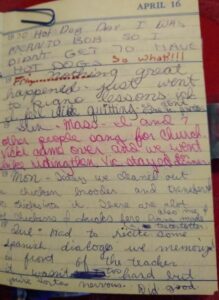 First, if you’ve been following along, Hot Dog Day was a big deal to me. (Funny, because now I can’t stand to eat them!) Second, note the defiance in my “so what!!!” after not getting a hot dog. Apparently, the crime was worth the punishment.

At least I was honest and said why I wanted to quit. Practice – I never enjoyed it because Mrs. Bush only gave us classical music to play. I remember wanting something modern because I was tired of Bach and Beethoven. And today – all these years later – I still remember how to play some of those classics.

I have no memory of singing at church – wish I’d added more details.

*1973 (age 15): Mon – Today we cleaned out a chicken brooder and transferred 120 chicks into it. There are a lot of chickens and ducks here. Also me and Diana made a teetertotter.

This is probably one of my all-time favorite memories – not just of this trip to Diana’s grandma’s farm, but a lifetime all-favorite. We had to move 120 baby chicks – which is a lot of little peeping yellow fuzzballs. I remembering wanting to hold as many as possible because they were so cute. I also seem to remember there was poop involved, but it was still fun.

*1974 (age 16): Tue – Had to recite some Spanish dialogs we memorized in front of the teacher it wasn’t too hard but you’re sorta nervous. Did good.

Ah yes, Spanish class with Fred Savala. I took three years of Spanish and to this day still remember how to say, “I’m sick,” “Where is the bathroom?, and “What time is it?” Mr. Savala was great – every time we had a test our class would ask him about his latest trip to Mexico. He’d start talking and would run out of time to give us the test. While it didn’t work every time, we had fun trying to get out of tests. He also had us memorize dialogue – so much memorizing. I figured if someone came up to me and asked the EXACT phrases in Spanish, I would be able to talk to them. As far as conversational Spanish in real time, I really didn’t have a clue.

He was a good guy and lived a few blocks from us. Years after I’d graduated, he and my dad ended up going to the same gym. My dad would always call me and tell me, “Fred said to tell you ‘Hi’.” Then Dad would go on to tell me about Fred’s latest trip to Mexico which always made me smile.

Note to self: While you might think Mr. Savala’s memorizing was a waste of time – in reality, there was a higher purpose - public speaking. Each time you got up in front of the class, you conquered a little more of your fear of standing in front of a group. Trust me, it will come in handy many times throughout your life.

Sometimes, it’s not so of a homework lesson, but more of a life-skill lesson.