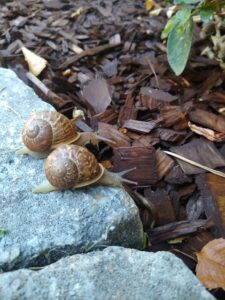 While I was tending my garden the other day I happened upon two snails out for a stroll. I watched as they took their time navigating the rough surface of the paver bricks. And, as they crawled across the jagged wood mulch. Then, after taking their time, they ended up under the tender leaves of a rose bush.

While they crawled, life around them moved much faster. Crows circled treetops. Hummingbirds flitted from flower to flower. Our dogs barked and chased each other around the backyard.

Watching them reminded me of the journey we take as writers and how easy it is to get caught up comparing ourselves to what everyone else is doing. We wonder why can’t write faster. Why we don’t have x-amount of books published. Why we only have a dozen people on our mailing list. We wonder what’s a mailing list? Then, we question if we’re cut out for the writer’s life because we’re still crawling instead of soaring or flitting.

After taking eleven years to write and publish my first book, I felt quite proud of myself. Hey, I finally did it! To gain more information about publishing, I joined a few Facebook groups that I hoped would be helpful. Soon, I realized they had the opposite effect. I read how others were writing a book a month and publishing four books a year. How they had tens of thousands of people on their mailings lists and were making six-figures. And, after comparing my journey with theirs, I felt like a failure. How would I ever compete with their kind of progress?

Then I remembered the snails. Instead of comparing themselves with the crows, hummingbirds, or dogs, they stayed true to who they were. Moving slowly. Inch-by-inch. Reaching their destination in their own time. In other words, the snails didn’t care about the others’ progress.

Now, it’s not that we shouldn’t care; we just need to stop measuring our accomplishments against those around us. We need to be kind to ourselves. We need to realize we are going as fast as we can at this point in time. And, whether it takes eleven years or eleven months to write and publish a book it doesn’t matter. We’ll move along at our own pace. Though we might go through rough and jagged times and it might take a while, we’re still moving forward.

If you’re struggling with your progress, don’t give up. Only you can determine the pace of your writing journey. While you might look to others for encouragement, don’t be discouraged. Care about where you are, but don’t let it stop you. And remember the snails. Like them, with unwavering determination, we will move toward and eventually reach our goals.

2 thoughts on “Writing at a Snail’s Pace”